This article is presented with some apprehension, as I fear straying outside my areas of knowledge. I shall try not to but even so, this is informed opinion rather than a reviewed and referenced scientific note.

Vaccines are very powerful, since they trigger the immune system, which is itself powerful. I suspect that the many adverse effects reported in ‘Gulf War Syndrome’ were due to reactions to the “shots” soldiers were given, supposedly to mitigate the effects of chemical weapons.

Diseases usually have their distinctive character. Before modern medicine, disease could become advanced, and a patient would walk into a surgery with an infection flourishing. Diagnosis was easy, because its distinctive features had become obvious. Now, when often all that is presented are early signs, visual diagnosis is much more difficult.

The distinctive character of a disease also determines the approach taken to treat it. Much is still unknown about Covid-19 but present evidence overwhelmingly indicates that vaccines are inappropriate. Vaccines are effective against initial infection, but in this case the virus infects epithelial cells, particularly of the throat and lungs. That is, initial infection takes place at sites in the upper respiratory tract which are not well served by the systemic immune system. Macrophages, lymphocytes and the like can have extraordinary reach, but they cannot extend to something sitting on the surface of the skin (or other external-facing cells). Developing a vaccine for Covid-19 is like producing a vaccine to protect against a wart virus. I hesitate to say that it’s impossible but it seems most unlikely.

Further, there is evidence that CoV-2 interferes with the immune response to it, in which case an attempted vaccine could have unpredictable effects.

To my mind, anyone speaking of a vaccine for Covid-19 is demonstrating that they don’t know what they’re talking about. Either that or they are mercenaries for media attention. Claims that virus research of the kind that led to the emergence of CoV-2 is “in pursuit of a vaccine” are pure obfuscation.

The idea that people might be subject to mandatory vaccination is appalling. Giving medical treatment to healthy people who do not want it is not medicine, and certainly cannot be considered ethical.

Herd immunity is not relied upon for farm animals in cases of swine flu, foot and mouth disease etc. when it really might be appropriate. Instead herds are culled, involving great devastation and distress to farmers. That obviously can’t be done with humans. I suspect that the concept of herd immunity was originally mentioned at some advisory meeting and was seized upon by politicians as an excuse to do nothing.

We live in an age which is conducive to the proliferation of viruses. There are many complex new chemicals in the environment. Food animals are factory-farmed and fed antibiotics to fatten them. There is the ‘Too clean hypothesis’ – that our surroundings have become so sterile that the immune system has not enough work to do, and this accounts for the rise in allergies and similar dysfunctions. We are much freer of parasites and diseases than is typical historically. It wasn’t long ago that afflictions like tape-worms and tuberculosis were commonplace.

Bacteria on the skin and elsewhere, called ‘normal flora,’ can serve as a protective barrier because an attacking virus first encounters bacteria, not your own cells. George Carlin might have had the right idea, but his attitude is inappropriate for releases of laboratory viruses and biological warfare agents.

My view is that herd immunity to Covid-19 is unlikely.

Incidentally, we one “catches a chill” it’s not a new infection. As I understand it, a virus you already have has been reactivated by a sudden change in temperature.

What is a virus?

A virus can be thought of as an amplifying poison. It’s not alive, since life involves eating, excreting and replicating. A virus relies on a living cell to replicate. Viruses are not killed but inactivated. 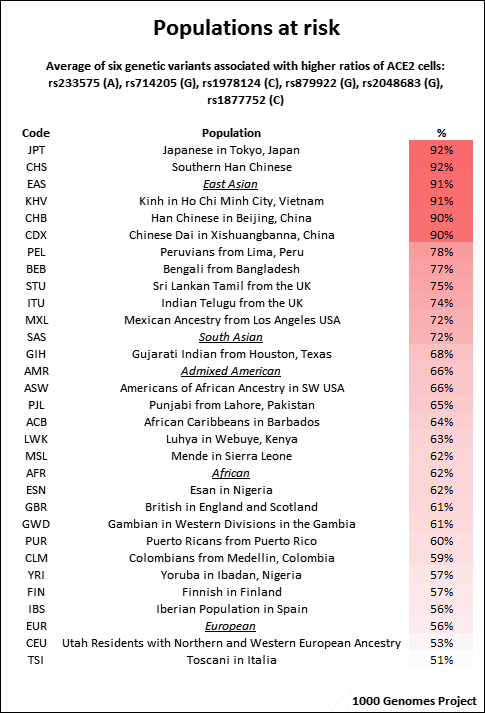 It has been argued that CoV-2 is already widespread, with the results of antibody tests being quoted in support. An antibody test only demonstrates contact with a pathogen. Consider these two imaginary cases:

Case A: Joe Bloggs talks to John Doe in the street. They stay a moderate distance apart but it’s a still day and one inhales a small number of CoV-2 virions from the other. Most hit the back of his throat while a few make it to his lungs. The infection is so sparsely distributed however that local antibody proteins are able to suppress each minor infection site.

Case B: Jimmy Chu is male, Oriental and a non-smoker, each of which may increase his susceptibility to infection by CoV-2. Unmasked, he walks into a shop which doesn’t have its doors and windows open and is unlucky enough to walk into a cloud of virus recently exhaled by a previous customer. This is sufficent for productive infection. A patch is established in the throat which local antibody is unable to overcome, and the infection progresses to the lungs. There, viral replication extends deeper and contacts blood and nerves, with unknown consequences. There may be pneumonia and/or hypoxia. However he recovers, and some time later is given an antibody test.

Assuming perfect accuracy, both of these cases will yield a positive result in an antibody test.

There is potential for a therapeutic approach using what I call ‘super vaccines’ but these are not really vaccines in the accepted sense. They are attractive to medical scientists on multiple grounds but in this case they may entail complexity where none is required. No, the proper approach to Covid-19 is to confirm at least one effective treatment and thereafter improve upon it. Prime candidates I know of are moroxydine, hydroxychloroquine plus zinc, and high dose IV vitamin C. These known and known to be safe generics are the obvious place to start. Hopefully this is already underway.

I began with a caveat because vaccines are not my field. Not being familiar with recent developments may not diminish my appraisal, because medicine, like much in academia, tends to go in cycles. Things are re-discovered which emerged decades previously but were forgotten or mislaid. In science, perhaps especially for medical science, there is a place called the ‘Valley of Death’ where great ideas and discoveries lie moribund. The failure to further develop them can be due to commercial considerations (e.g. patent expiry or complications) or the technical limitations of the time. Moroxydine and DRACO are two particularly salient examples. The Valley of Death is full to overflowing.

Some (or many) might ask, who is this Simon Sheppard, besides a notorious heretic and international thought-criminal? Why should we take what he says seriously? So a few words about my qualifications will not go amiss.

In the old days, doctorates were conferred on people who made a significant contribution to knowledge. Their achievement was validated by the publication of a paper, disseminating the new knowledge. The process was that the work was written up then submitted to, accepted and published by a peer-reviewed journal. This was all well before the industrialisation of academia and the number of academic titles exploded; see Epstein Angles. My own experience is that a paper encapsulates about three years’ work.

Then around the 1960s a great expansion in higher education began, which shortly led to a flood of papers being submitted to the journals. Postgraduates who had spent years in research were desperate to have their work published, because otherwise they wouldn’t get their degree. The academic presses of the time were inundated with middling and often mediocre work, diminishing the integrity and value of their publications.

Thus the system changed, and the protocol became that it was only necessary for postgraduate papers and theses to be evaluated by the university itself, and “published” in the university’s own library.

Under the old, superior system I have earned three Ph.D’s. However, since it was all done outside of a university, I don’t have formal qualifications or title beyond my B.Sc. in Mathematics. My ‘citations tally’ is well above average.